We are kicking off the 2013-14 Fat Bike Season with a new website, new race schedule and new sponsors.

Our webite has moved!  Click the logo below to visit www.greatlakesfatbikeseries.com

The Great Lakes Fat Bike Series wrapped up in Hastings, Michigan on Saturday March 23 with the Barry-Roubaix.  Primarily a gravel road race, Barry-Roubaix includes a Fatbike class, which served as the series finale (and tie-breaker if needed for series standings).

True to form, West Michigan weather brought mostly frozen roads and chilly temps just under freezing at the start of the race.  Over 60 fatbike racers lined up with 3000 cyclists in various other categories.  After 36 miles of gravel and never ending hills the end top three men and women were:

Huge thanks to the Barry-Roubaix organizers, sponsors and the city of Hastings, Michigan for putting on one of the biggest bike races in North America!

While mostly not fatbike specific, Drunkcyclist.com has a race report HERE


video by SammysEliteRacing
Posted by Scott at 10:33 AM 2 comments:

If there is any doubt in your mind as to the future of fatbike riding and racing look no farther than the Fatbike Birkie, which debuted last weekend in Cable, Wisconsin.  The Fatbike Birkie, stop number 5 on the Great Lakes Fat Bike Series, follows the trails used for the American Birkebeiner, the largest nordic ski race in North America.  Based on this year's attendance the Fatbike Birkie goes down in the record books as the biggest fatbike race in the USA (at least we think so.. anybody with evidence otherwise should let us know).

Racers lined up at Telemark Resort on Saturday March 9 for 46k of perfectly groomed trail.  By race end two riders, Jorden Wakeley and Danielle Musto made history by both winning the Fatbike Birkie and cementing their leads atop the GLFBS standings! Both riders beat out a field stacked with talent.  In the mens' race the podium was rounded out by Jesse LaLonde (winner of the Fatbike Frozen 40) and Todd McFadden.  In the womens' race second and third place went to Diana McFadden and Kristy Henderson respectively.

While their wins at the Fatbike Birkie may seal the series victory for Wakeley and Musto, the second and third place postions in the GLFBS standings are still up for grabs. We have one more event to contest. The Barry-Roubaix is only a week away!

fat-bike.com has a post race interview with Danielle Musto HERE

GLFBS sponsor Twin Six has a few photos from the Birkie on their Facebook page
Posted by Scott at 8:04 AM No comments: 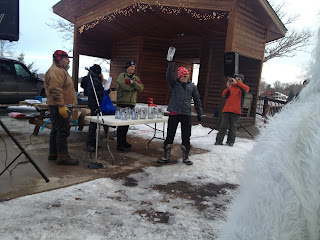 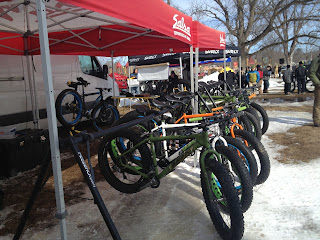 Results for the Cuyuna Lakes Whiteout are now online here.  The top three men and women were:

We'll have series standings updated soon.  The race was run under near perfect conditions, with temps in the teens at the start and freshly groomed trail on the Sagamore Unit trails.  Just over 100 racers lined up on Saturday morning.  Riders came from all over Minnesota and the great lakes region, setting a record for attendance.

A large cache of event photos will be going online soon.  As soon as they're up we'll post a link.

Huge congratulations to the Cuyuna Lakes Mountain Bike Crew for putting on a world class event!


Special thanks to the Deerwood Country Inn for giving us the Rock Star Treatment.  They operate a mountain bike friendly hotel in the heart of Minnesota's northern single track!

The 2013 running of the Fatbike Frozen 40 is in the books!  Blue sky, low temps and perfectly groomed singletrack greated over 100 riders at Elm Creek Park Reserve on raceday.  Conditions could not have been closer to perfect.

Plenty of photos from the race here

stay tuned for updated series standings later this week!
Posted by Scott at 5:42 AM No comments:

On February 16 one hundred lucky fatbike riders will line up for Minnesota's premiere fatbike race, The Fatbike Frozen Forty.  Unfortunately, it's too late to register.  The race is capped and all the entries sold out within two weeks of registration opening.

If you're interested in checking out the race day festivities swing by Elm Creek Park on race day to check out the expo area and a host of race sponsors, such as  45NRTH, Maple Grove Cycling and a number of other great industry and local sponsors from the Minneapolis area.

Check out the Triple F website for more details!

We are lucky to have Optic Nerve as a sponsor of the Great Lakes Fat Bike Series.  Each of the top three men and women at series end will receive eyewear from Optic Nerve.  The series winners will receive a pair of Optic Nerve Boreas goggles.

The Boreas comes in several different color schemes and includes interchangeable lenses so you can customize your eye protection for any winter conditions.

If your local shop doesn't carry Optic Nerve, you can purchase the Boreas, as well as the rest of Optic Nerve's line of performance eyewear directly from their website. 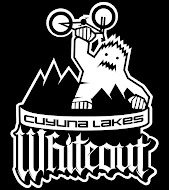 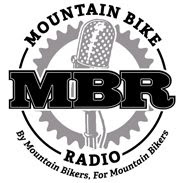